There’s a photo making the rounds in the User Experience world that’s gained thousands of favorites and retweets. You know the one — it shows nice, unused paved path next to a dirt path presumably worn into the grass by loads of people whose real goals were to get from point A to point B along a somewhat more desirable line. It originally came from Twitter user @benkimediyorum.

Why? Because Design done properly reflects a well-planned user experience. The User Experience reflects a design created with the input of the users (in this case, the walkers), but also with the input of the business (perhaps this is a school?), the constraints of the budget, the environment, and so on. Design and UX go hand in hand, and I don’t believe you can pit them against each other.

If Design had been part of the project, it would have started out with some conversations. First, hypothetically, with the users.

A user researcher or two could have conducted some simple (and fun) ethnographic research. All that means is they park themselves under a tree and just observe the comings and goings of students. That would have been a great first step. From there, some basic user interviews could have been conducted. “Why are you walking from here to there?” “I see you’re coming straight from that parking lot. Where are you headed? Where did you come from?” Presumably, with how worn that dirt path is, there would have been a lot of pedestrian traffic to interview. Eventually, if you talk to enough people, you probably start seeing patterns, what times of day get heavy usage? are there athletes? students? carrying backpacks or not? gender? Probably more than enough information to decide not only where to create your path, but maybe even how wide to make it, or even which materials to use. (What if most of the people are on rollerblades because they play roller hockey in that empty lot from 6-8 PM? And you were planning on your path being cobblestone?)

Anyway, my point is that some easy-to-do user research would have uncovered a lot of actionable information.

Design’s role is also to understand the client’s goals, not just the end user goals. A roundtable discussion or 1-on-1 interviews with the business would have elucidated any constraints that the business had. Suppose the budget is finite and it’s not possible to pave two paths. What if the land adjacent to the proposed path is notoriously flood prone or is some kind of wildlife preserve. Now what?

Now what is that Design — that ongoing conversation between user and client — would have come up with the best possible outcome, given the constraints of the client and the goals of the user.

As a User Experience Design practitioner, I can tell you this: The best possible outcome is NOT always the ideal outcome for all parties. That’s reality. But Design — good Design — will always attempt to create the ideal User Experience. The two go hand-in-hand.

All that said, for the sake of this Design vs. UX photo, let’s assume that the school had sufficient budget to create a paved path (or two) anywhere between the two points and that the land was not some kind of preserve or swamp. No major constraints, and the project developers were eager to just go out a make a path.

What I see in the photo is not Design vs. User Experience. If we’re to infer that the paved path is the undesirable one, it is actually the antithesis of Design. The dirt path is what should have been the design had Design and UX been involved. Using my mad Photoshop skills, I have recaptioned the photo: Development Without Design and Unfulfilled User Goals. The paved path is what happens when a project plows ahead without UX and Design. The dirt path represents unmet, undiscovered user goals and desires — the beginnings of a design unrealized. 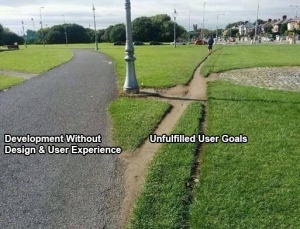 What’s scary is how often I see this in the corporate world of web sites and applications. Where a business unit says, “We need a web site that does blah.” And developers plow ahead, paving a web site that accomplishes their own aims, and leaving the poor users to trudge through the dirt to accomplish their goals.

It’s obvious as soon as you enter the guest room at the Hyatt Fisherman’s Wharf that they’ve spent a lot of money making the rooms modern and sleek. Flat screen TV, stylish furniture, aesthetic bathroom, even an iHome iPod clock radio all contribute to a visual delight, sure to appease the well traveled or weary guest seeking the comforts of a modern home.

But when you actually start DOING things in the room, you quickly find it’s a case of design for its own sake and not for meeting people’s needs or goals. END_OF_DOCUMENT_TOKEN_TO_BE_REPLACED